Conversation in the dark 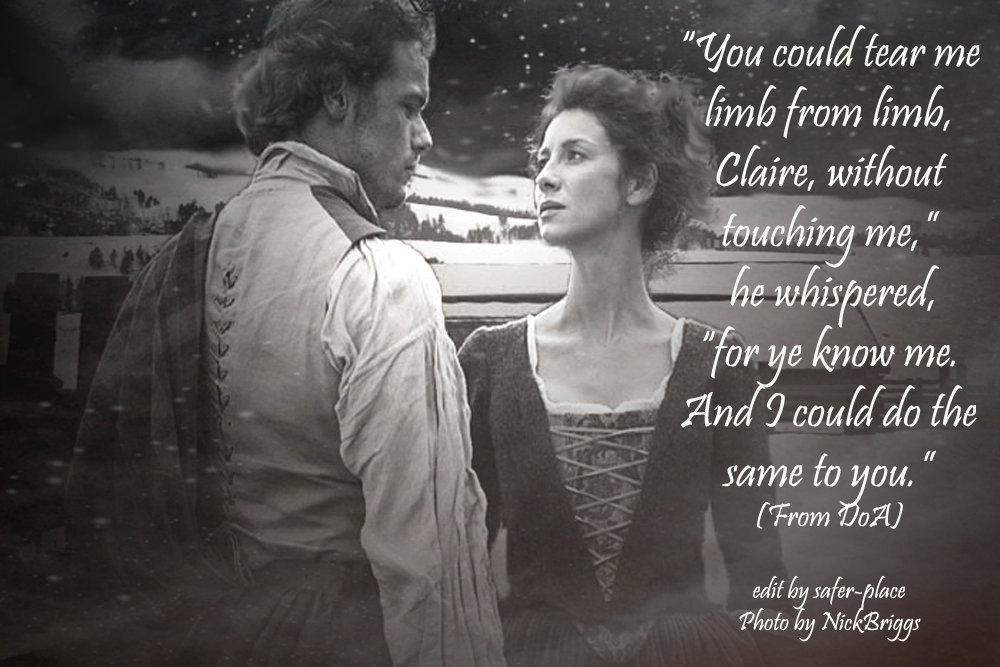 “You could,” I said, feel­ing a lit­tle faint. “But I real­ly wish you wouldn’t.”
He smiled a lit­tle at that, bent and kissed me, very gen­tly. We stood togeth­er, bare­ly touch­ing save our lips, breath­ing each other’s breath.Yes, we said silent­ly to each oth­er. Yes, I am still here. It was not res­cue, but at least a tiny life­line, stretched across the gulf that lay between us. I did know what he meant, about the dif­fer­ence between dam­age to body or soul; what I couldn’t explain to him was the link between the two that cen­tered in the womb. At last I stepped back, look­ing up at him.
“Bree’s a very strong per­son,” I said qui­et­ly. “Like you.”
“Like me?” He gave a small snort. “God help her, then.”
He sighed, then turned and began to walk slow­ly along the line of the fence. I fol­lowed, hur­ry­ing a lit­tle to catch up.
“This man, this Roger she speaks of. Will he stand by her?” he asked abruptly.
I took a deep breath and let it out slow­ly, not know­ing how to answer. I’d known Roger only a few months. I liked him; was very fond of him, in fact. From every­thing I knew of him, he was a thor­ough­ly decent, hon­or­able young man—but how could I even pre­tend to know what he might think, do, or feel, upon find­ing that Bri­an­na had been raped? Even worse, that she might well car­ry the rapist’s child?The best of men might not be able to deal with such a sit­u­a­tion; in my years as a doc­tor, I had seen even well-estab­lished mar­riages shat­ter under the strain of small­er things. And those that did not shat­ter, but were crip­pled by mis­trust … invol­un­tar­i­ly, I pressed a hand against my leg, feel­ing the tiny hard­ness of the gold cir­cle in my pock­et. From F. to C. with love. Always.
“Would you do it?” I said at last. “If it were me?”
He glanced at me sharply, and opened his mouth as though to speak. Then he closed it and looked at me, search­ing my face, his brows knot­ted with trou­bled thought.
“I meant to say ‘Aye, of course!’ ” he said slow­ly, at last. “But I did promise ye hon­esty once, did I not?”
“You did,” I said, and felt my heart sink beneath its guilty bur­den. How could I force him to hon­esty when I couldn’t give it him back? And yet he had asked.
He struck the fen­ce­post a light blow with his fist.“Ifrinn! Yes, damn it—I would. You would be mine, even if the child was not. And if you—yes. I would,” he repeat­ed firm­ly. “I should take you, and the child with ye, and damn the whole world!”
“And nev­er think about it after­ward?” I asked. “Nev­er let it come into your mind when you came to my bed? Nev­er see the father when you looked at the child? Nev­er throw it back at me or let it make a dif­fer­ence between us?”He opened his mouth to reply, but closed it with­out speak­ing. Then I saw a change come over his fea­tures, a sud­den shock of sick realization.
“Oh, Christ,” he said. “Frank. Not me. It’s Frank ye mean.”
I nod­ded, and he gripped my shoulders.
“What did he do to ye?” he demand­ed. “What? Tell me, Claire!”
“He stood by me,” I said, sound­ing choked even to my own ears. “I tried to make him go, but he wouldn’t. And when the baby—when Bri­an­na came—he loved her, Jamie. He wasn’t sure, he didn’t think he could—neither did I—but he tru­ly did. I’m sor­ry,” I added.
He took a deep breath and let go of my shoulders.
“Din­na be sor­ry for that, Sasse­nach,” he said gruffly. “Nev­er.” He rubbed a hand across his face, and I could hear the faint rasp of his evening stubble.
“And what about you, Sasse­nach?” he said. “What ye said—when he came to your bed. Did he think—” He broke off abrupt­ly, leav­ing all the ques­tions hang­ing in the air between us, unstat­ed, but asked nonetheless.“It might have been me—my fault, I mean,” I said at last, into the silence. “I couldn’t for­get, you see. If I could … it might have been dif­fer­ent.” I should have stopped there, but I couldn’t; the words that had been dammed up all evening rushed out in a flood.
“It might have been easier—better—for him if it had been rape. That’s what they told him, you know—the doc­tors; that I had been raped and abused, and was hav­ing delu­sions. That’s what every­one believed, but I kept say­ing to him, no it wasn’t that way, I insist­ed on telling him the truth. And after a time—he believed me, at least halfway. And that was the trou­ble; not that I’d had anoth­er man’s child—but that I’d loved you. And I wouldn’t stop. I couldn’t,” I added, in a soft­er tone. “He was bet­ter than me, Frank was. He could put the past away, at least for Bree’s sake. But for me—” The words caught in my throat and I stopped.
He turned then, and looked at me for a long time, his face quite expres­sion­less, eyes hid­den by the shad­ows of his brows.
“And so ye lived twen­ty years with a man who could­na for­give ye for what was nev­er your fault? I did that to ye, no?” he said. “I am sor­ry, too, Sassenach.”
A small breath escaped me, not quite a sob.
“You said you could tear me limb from limb with­out touch­ing me,” I said. “You were right, damn you.”“I am sor­ry,” he whis­pered again, but this time he reached for me, and held me tight against him.“That I loved you? Don’t be sor­ry for that,” I said, my voice half muf­fled in his shirt. “Not ever.” 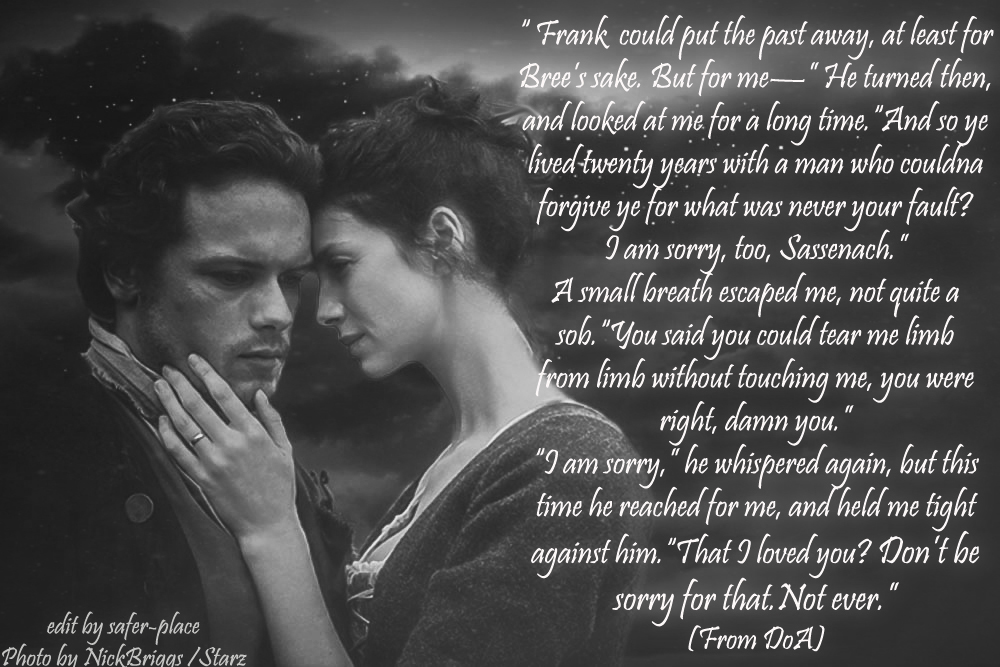 He didn’t answer, but bent his head and pressed his cheek against my hair. It was qui­et; I could hear his heart beat­ing, over and under the wind in the trees. My skin was cold; the tears on my cheeks chilled instantly.
At last I let my arms drop from around him and stepped back.
“We’d bet­ter go back to the house,” I said, try­ing for a nor­mal tone. “It’s get­ting awful­ly late.”
“Aye, I sup­pose so.” He offered me his arm, and I took it. We passed in an eas­i­er silence down the path to the edge of the gorge above the stream. It was cold enough that tiny ice crys­tals glint­ed among the rocks where the starlight struck them, but the creek was far from frozen. Its gur­gle and rush filled the air, and kept us from being too quiet.
“Aye, well,” he said, as we turned up the path past the pigsty. “I hope Roger Wake­field is a bet­ter man than the two of us—Frank and I.” He glanced at me. “Mind ye, if he’s not, I shall beat him to a pudding.”
Despite myself I laughed.
“That will be a great help to the sit­u­a­tion, I’m sure.”
He snort­ed briefly and walked on. At the bot­tom of the hill, we turned with­out speak­ing, and came back in the direc­tion of the house. Just short of the path that led to the door, I stopped him.
“Jamie,” I said hes­i­tant­ly. “Do you believe I love you?”
He turned his head and looked down at me for a long moment before reply­ing. The moon shone on his face, pick­ing out his fea­tures as though they had been chis­eled in marble.
“Well, if ye don’t, Sasse­nach,” he said at last, “ye’ve picked a ver­ra poor time to tell me so.”
I let out my breath in the ghost of a laugh.“No, it’s not that,” I assured him. “But—” My throat tight­ened, and I swal­lowed hasti­ly, need­ing to get the words out.
“I—I don’t say it often. Per­haps it’s only that I wasn’t raised to say such things; I lived with my uncle, and he was affec­tion­ate, but not—well, I didn’t know how mar­ried people—”
He put his hand light­ly over my mouth, a faint smile touch­ing his lips. After a moment, he took it away.
I took a deep breath, steady­ing my voice.
“Look, what I mean to say is—if I don’t say it, how do you know I love you?”
He stood still, look­ing at me, then nod­ded in acknowledgment.
“I know because ye’re here, Sasse­nach,” he said qui­et­ly. “And that’s what ye mean, aye? That he came after her—this Roger. And so per­haps he will love her enough?”
“It’s not a thing you’d do, just for friendship’s sake.”
He nod­ded again, but I hes­i­tat­ed, want­i­ng to tell him more, to impress him with the sig­nif­i­cance of it.
“I haven’t told you a great deal about it, because—there aren’t words for it. But one thing about it I could tell you. Jamie—” I shiv­ered invol­un­tar­i­ly, and not from the cold. “Not every­one who goes through the stones comes out again.”
His look sharpened.
“How d’ye ken that, Sassenach?”
“I can—I could—hear them. Screaming.”I was shak­ing out­right by this time, from a mix­ture of cold and mem­o­ry, and he caught my hands between his own and drew me close. The autumn wind rat­tled the branch­es of the wil­lows by the stream, a sound like dry, bare bones. He held me until the shiv­er­ing stopped, then let me go.
“It’s cold, Sasse­nach. Come inside.” He turned toward the house, but I laid my hand on his shoul­der to stop him again.
“Jamie?”
“Aye?”
“Should I—would you—do you need me to say it?”
He turned around and looked down at me. With the light behind him, he was haloed in moon­light, but his fea­tures were once more dark.
“I din­na need it, no.” His voice was soft. “But I would­na mind if ye want­ed to say it. Now and again. Not too often, mind; I would­na want to lose the nov­el­ty of it.” I could hear the smile in his voice, and couldn’t help smil­ing in return, whether he could see it or not.
“Once in a while wouldn’t hurt, though?”
“No.”
I stepped close to him and put my hands on his shoulders.
“I love you.”
He looked down at me for a long moment.
“I’m glad of it, Claire,” he said qui­et­ly, and touched my face. “Ver­ra glad. Come to bed now; I’ll warm ye.” 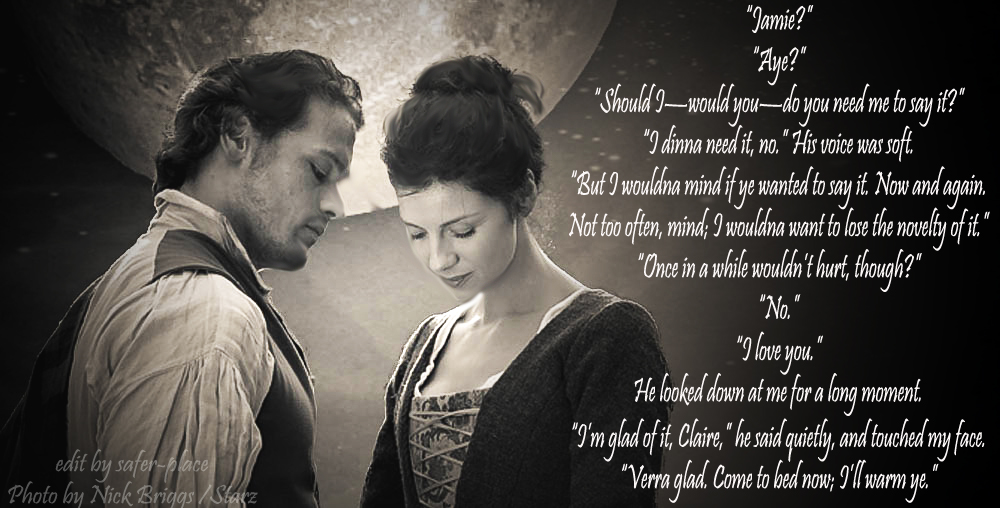