“I don’t know,” I said, with the usu­al pang of faint regret for my van­ished fam­i­ly. “It wasn’t on my birth cer­tifi­cate, and if Uncle Lamb knew, he nev­er told me. I know when Bri­an­na was born, though,” I added, more cheer­ful­ly. “She was born at three min­utes past three in the morn­ing. There was a huge clock on the wall of the deliv­ery room, and I saw it.”
Dim as the light was, I could see his look of sur­prise clearly.
“You were awake? I thought ye told me women are drugged then, so as not to feel the pain.”
“They most­ly were, then. I wouldn’t let them give me any­thing, though.” I stared upward. The shad­ows were thick around us now, but the sky was still clear and light above, a soft, bril­liant blue.
“Why the hell not?” he demand­ed, incred­u­lous. “I’ve nev­er seen a woman give birth, but I’ve heard it more than once, I’ll tell ye. And damned if I can see why a woman in her right mind would do it, and there was any choice about it.”
“Well …” I paused, not want­i­ng to seem melo­dra­mat­ic. It was the truth, though. “Well,” I said, rather defi­ant­ly, “I thought I was going to die, and I didn’t want to die in my sleep.”
He wasn’t shocked. He only raised one brow, and snort­ed faint­ly with amusement.
“Would ye no?”
“No, would you?” I twist­ed my head to look at him. He rubbed the bridge of his nose, still amused at the question.
“Aye, well, per­haps. I’ve come close to death by hang­ing, and I did­na like the wait­ing a bit. I’ve near­ly been killed in bat­tle a few times; I can­na say I was much con­cerned about the dying then, though, bein’ too busy to think of it. And then I’ve near­ly died of wounds and fever, and that was mis­ery enough that I was look­ing for­ward ver­ra keen­ly to being dead. But on the whole, giv­en my choice about it, I think per­haps I would­na mind dying in my sleep, no.”
He leaned over and kissed me light­ly. “Prefer­ably in bed, next to you. At a ver­ra advanced age, mind.” He touched his tongue del­i­cate­ly to my lips, then rose to his feet, brush­ing dried oak leaves from his breeks. 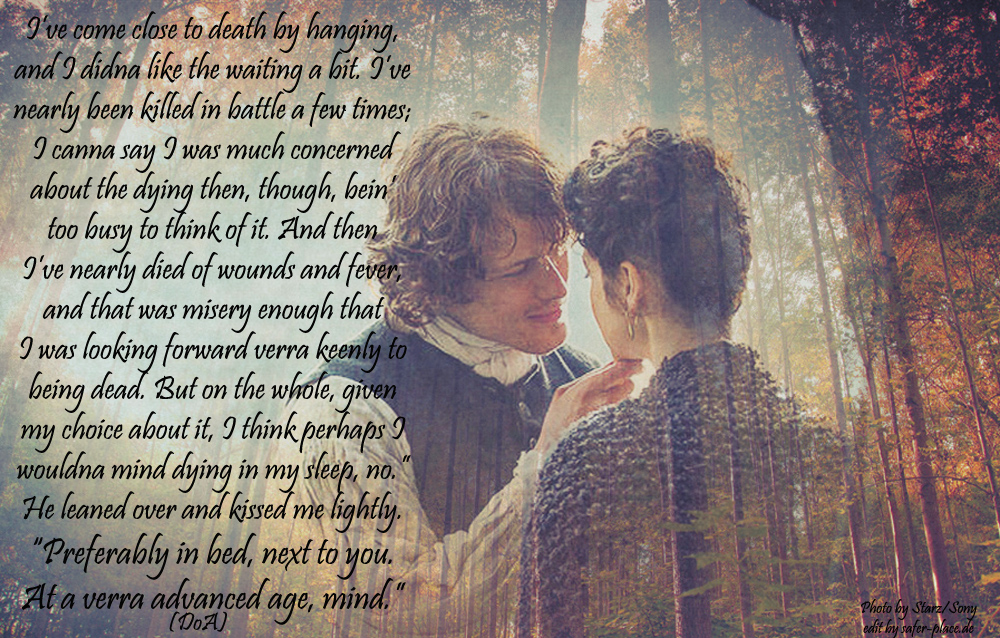 Because some said it was to dark..i did this Quote with a new edit but keep this here..so you can choose.… 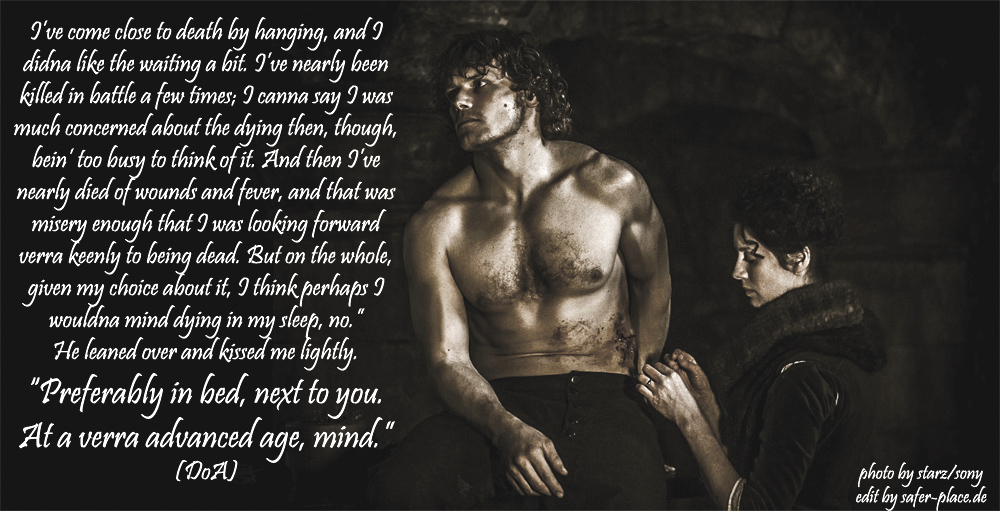