After a moment, there was a heavy, crunch­ing noise on the ground in front of me. I cracked my eyes open, and saw that he had sat down, just as he was, on the wet grav­el at my feet. He sat with bowed head, and the rain had left span­gles in his damp-dark­ened hair.“Will ye make me beg?” he said.“It was a girl,” I said after a moment. My voice sound­ed fun­ny; hoarse and husky. “Moth­er Hilde­garde bap­tized her. Faith. Faith Fras­er. Moth­er Hilde­garde has a very odd sense of humor.”The bowed head didn’t move. After a moment, he said qui­et­ly, “Did you see the child?”My eyes were open all the way now. I stared at my knees, where blown drops of water from the vines behind me were mak­ing wet spots on the silk.“Yes. The mâitresse sage-femme said I ought, so they made me.” I could hear in mem­o­ry the low, mat­ter-of-fact tones of Madame Bon­heur, most senior and respect­ed of the mid­wives who gave of their time at L’Hôpital des Anges.“Give her the child; it’s always bet­ter if they see. Then they don’t imag­ine things.

”So I didn’t imag­ine. I remembered.“She was per­fect,” I said soft­ly, as though to myself. “So small. I could cup her head in the palm of my hand. Her ears stuck out just a little—I could see the light shine through them.The light had shone through her skin as well, glow­ing in the round­ness of cheek and but­tock with the light that pearls have; still and cool, with the strange touch of the water world still on them.“Mother Hilde­garde wrapped her in a length of white satin,” I said, look­ing down at my fists, clenched in my lap. “Her eyes were closed. She hadn’t any lash­es yet, but her eyes were slant­ed. I said they were like yours, but they said all babies’ eyes are like that.”Ten fin­gers, and ten toes. No nails, but the gleam of tiny joints, kneecaps and fin­ger­bones like opals, like the jew­eled bones of the earth itself. Remem­ber man, that thou art dust.…I remem­bered the far-off clat­ter of the Hôpi­tal, where life still went on, and the sub­dued mur­mur of Moth­er Hilde­garde and Madame Bon­heur, clos­er by, talk­ing of the priest who would say a spe­cial Mass at Moth­er Hildegarde’s request. I remem­bered the look of calm appraisal in Madame Bonheur’s eyes as she turned to look me over, see­ing my weak­ness. Per­haps she saw also the tell­tale bright­ness of the approach­ing fever; she had turned again to Moth­er Hilde­garde and her voice had dropped further—perhaps sug­gest­ing that they wait; two funer­als might be needed.And unto dust thou shalt return.But I had come back from the dead. Only Jamie’s hold on my body had been strong enough to pull me back from that final bar­ri­er, and Mas­ter Ray­mond had known it. I knew that only Jamie him­self could pull me back the rest of the way, into the land of the liv­ing. That was why I had run from him, done all I could to keep him away, to make sure he would nev­er come near me again. I had no wish to come back, no desire to feel again. I didn’t want to know love, only to have it ripped away once more.But it was too late. I knew that, even as I fought to hold the gray shroud around me. Fight­ing only has­tened its dis­so­lu­tion; it was like grasp­ing shreds of cloud, that van­ished in cold mist between my fin­gers. I could feel the light com­ing, blind­ing and searing.He had risen, was stand­ing over me. His shad­ow fell across my knees; sure­ly that meant the cloud had bro­ken; a shad­ow doesn’t fall with­out light.“Claire,” he whis­pered. “Please. Let me give ye comfort.”“Comfort?” I said. “And how will you do that? Can you give me back my child?”He sank to his knees before me, but I kept my head down, star­ing into my upturned hands, laid emp­ty on my lap. I felt his move­ment as he reached to touch me, hes­i­tat­ed, drew back, reached again.“No,” he said, his voice scarce­ly audi­ble. “No, I can­na do that. But…with the grace of God…I might give ye another?”His hand hov­ered over mine, close enough that I felt the warmth of his skin. I felt oth­er things as well: the grief that he held tight under rein, the anger and the fear that choked him, and the courage that made him speak in spite of it. I gath­ered my own courage around me, a flim­sy sub­sti­tute for the thick gray shroud. Then I took his hand and lift­ed my head, and looked full into the face of the sun. 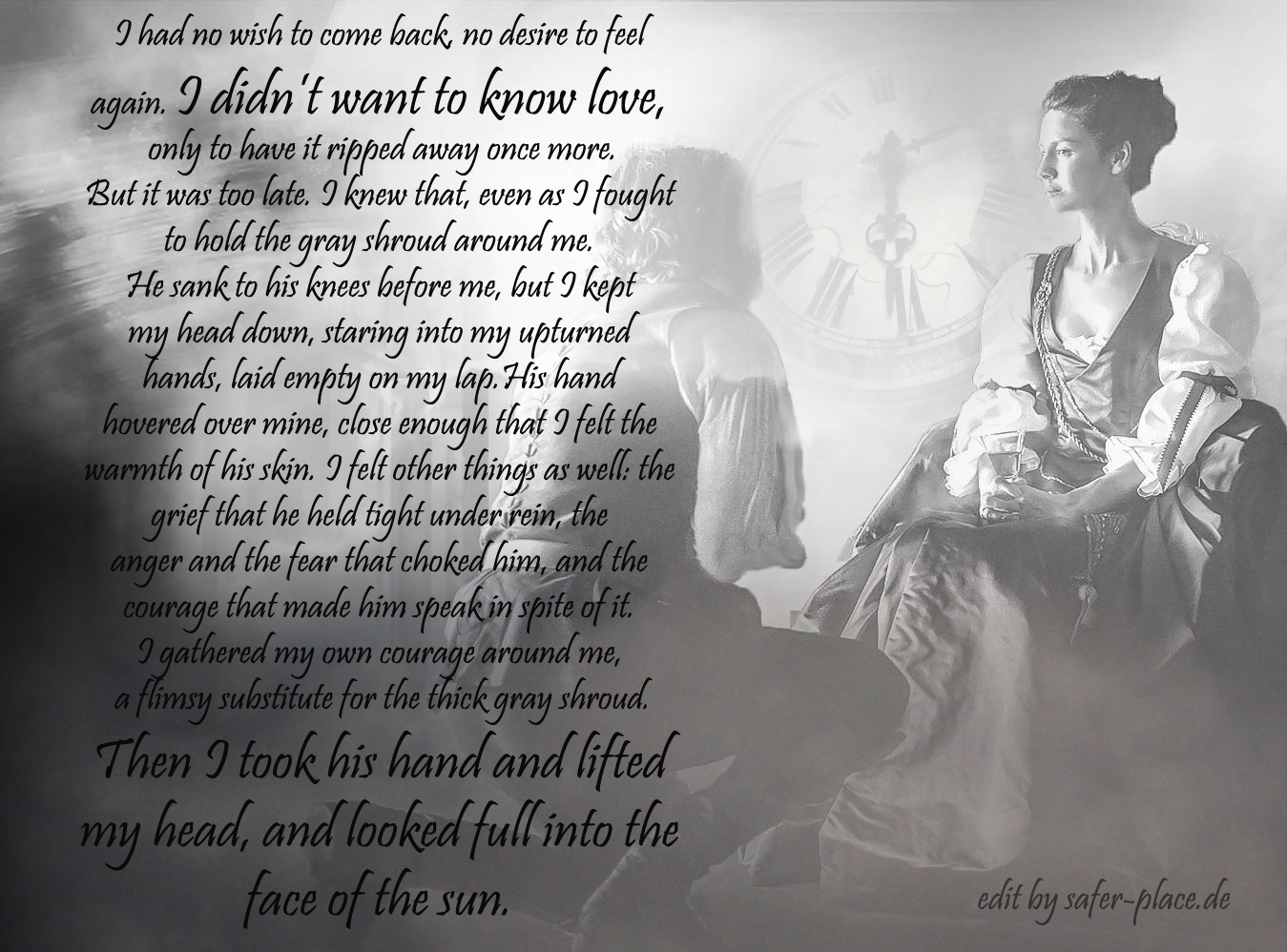